Over the last 15 years, 34 clinical studies (17 phase I or II, 17 phase III) have been published regarding the effects of hyperthermia combined with radiation therapy and/or chemotherapy. The following studies are the most important studies from leading European and North American research centers

Superficial tumors
In 1996, Cancer, the international journal of the American Cancer Society, reported a clinical study of 23 patients with head and neck tumors, breast carcinomas, and malignant melanomas, which was conducted by Mayer and Hallinan at Johns Hopkins Hospital (USA). The results showed complete remission in 89% of patients and demonstrated that 74% of patients were free of local recurrence after two years. All patients were treated with hyperthermia and brachytherapy. The authors concluded that “outpatient treatment of human neoplasia with interstitial thermoradiotherapy can be performed practically, and is safe and effective“ (refer to 77/11, pp. 2363-2370).
In 2005, a randomized Phase III study on hyperthermia and radiation therapy for the treatment of superficial tumors, which was conducted by Ellen Jones et al., was published in the Journal of Clinical Oncology (vol. 23, no. 13, pp. 3079-3085). The majority of the 109 patients in the study had a breast wall recurrence. The other patients were suffering from head and neck tumors or melanomas. In patients who received hyperthermia combined with radiation, complete remission was observed in 66% of cases, compared to 42% of patients who received radiation alone. The effect was even greater among patients who had previously undergone radiation. In this case, 68% of those who received hyperthermia and radiation experienced complete remission, compared to 24% who received radiation alone
Head and Neck tumors.
In 1993, the International Journal of Radiation Oncology, Biology, Physics reported on the results of a Phase III study by Valdagni and Amichelli at Ospedale S.Chiara in Trento, Italy, conducted on 41 patients with inoperable stage IV head and neck tumors. The results of the study showed that the combined treatment with hyperthermia and radiation therapy increased complete remission from 41% to 83%, local recurrence-free survival from 24% to 68%, and the 5 year survival rate from 0% to 53%, compared with radiation therapy alone (refer to vol. 28, pp. 163-169).
Malignant melanoma
In 1996, the results of a multi-centric Phase III study with recurrent or metastasizing malignant melanoma (performed by Overgaard, Aarhus, Denmark, et.al.) was published in the International Journal of Hyperthermia. The study showed that hyperthermia combined with radiation therapy increased the complete remission rate from 35% to 62% and recurrence-free survival after 5 years from 28% to 46% compared to radiation therapy alone (refer to vol. 12, no. 1, pp. 3-20).
Breast carcinoma
The results of a multi-centric clinical Phase III study that included 306 patients with superficial localized breast carcinoma were published in 1996 by Vernon, Hand, Field, et.al (London, Great Britain) in the International Journal of Radiation Oncology, Biology, Physics. The results showed that the rate of complete remission increased from 41% to 59%, and the recurrence-free survival rate from 30% to 50%, when comparing the combined hyperthermia and radiation therapy treatment with radiation therapy alone (refer to vol. 35, no. 4, pp. 731-744).
Glioblastoma
The results of a clinical Phase III study (performed by Sneed, Stauffer, McDermott, et.al. at the University of California, San Francisco, USA) on 112 patients with glioblastoma multiforme was published in 1998 in the International Journal of Radiation Oncology, Biology, Physics. The study showed a doubling of the 2-year survival rate when combining hyperthermia and brachytherapy compared with brachytherapy alone (refer to vol. 40, no. 2, pp. 287-295).
Soft tissue sarcoma
Promising results of a randomised Phase III multicentre study dealing with high-risk soft-tissue sarcoma (Management: Rolf Issels, University Hospital Großhadern, for the „European Organisation for Research and Treatment of Cancer Soft Tissue and Bone Sarcoma Group (EORTC-STBSG)“ and for the „European Society for Hyperthermic Oncology (ESHO)“) and including 341 patients were already presented at the ASCO meeting 2007. The patients were treated before and after surgery with chemotherapy alone or with addition of regional hyperthermia, both followed by radiotherapy. The results were published online in Lancet Oncology in April 2010. The results are clear and significant: The overall response after induction therapy was more than twice as high in the combined treatment group (plus hyperthermia) compared with the only chemotherapy treated group (28,8% versus 12,7%). The median duration of disease-free survival was prolonged for 14 months in the hyperthermia treated group compared to the control group (32 versus 18 months). Patients with signs of early disease progression and who received a consequent neo-adjuvant combination therapy with hyperthermia showed significant advantages in overall survival.
Cervical carcinoma
Martine Franckena from the Erasmus Medical Center at the University of Rotterdam published a study, which appeared in Int J Radiat Oncol Biol Phys. 2008 Mar 15;(4), in which patients with cervical carcinoma who were treated with or without hyperthermia were observed over a period of twelve years. The study showed that only 20% of those who had received radiation therapy alone survived; however, 37% of the women who received hyperthermia combined with radiation therapy were still alive. This highly significant result showed for the first time that the advantage of hyperthermia was not limited to a short period of time, but rather had long-term effectiveness. 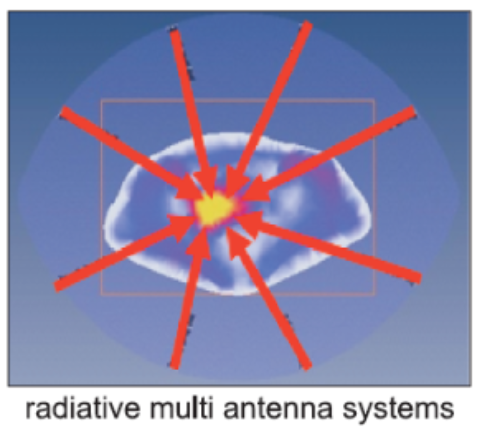